Extraordinary measures in the field of public procurement 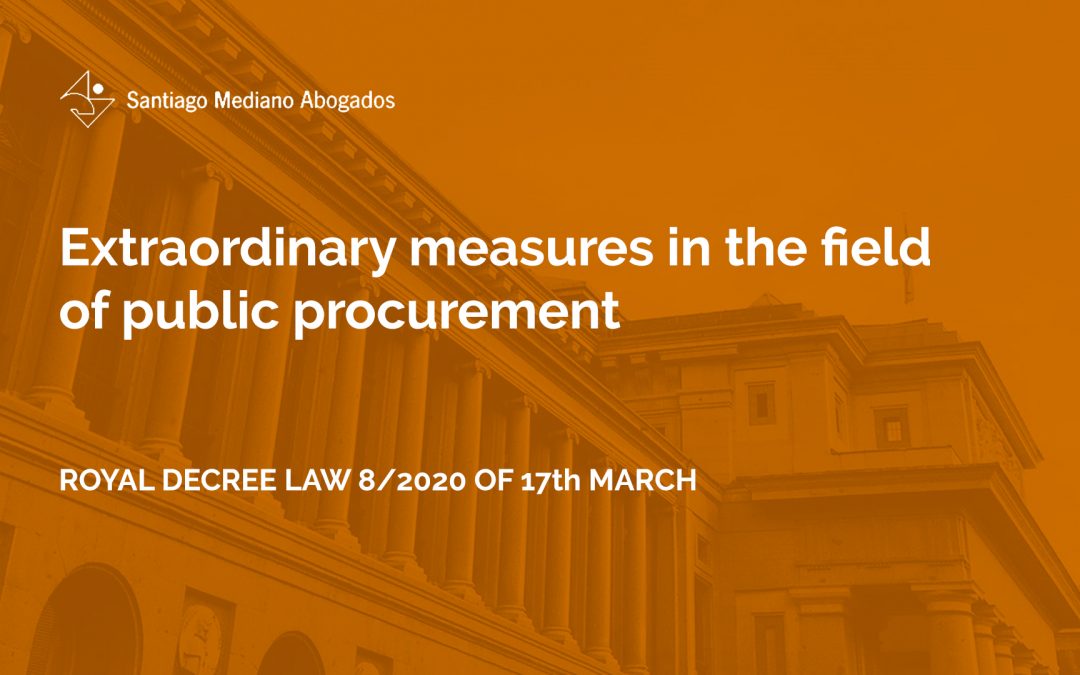 The state of emergency and the containment measures adopted due to the COVID19 pandemic affect all public contracts, generating losses and added costs for contractors; making it, in some cases, impossible to execute them within the contractually established period, if not determining their end. Royal Decree Law 8/2020, of 17th March[1], seeks to establish, with the greatest possible degree of legal certainty, homogeneous criteria that will facilitate as far as possible the preservation of contracts, minimising damage during these weeks of transition.

Beyond some inconsistencies and contradictions in the text of the rule – which can undoubtedly be explained by the time constraints and the corrections made to the original text – it is to be welcomed that the public authority has adopted a generous and comprehensive criterion in favour of companies that softens the rigour of the principle of risk and chance (Article 197 of Law 9/2017 on public sector contracts, LCSP) that governs public procurement. The measures introduced by Royal Decree Law 8/2020 of 17th March will be in force for one month, without prejudice to its possible extension.

The rule differentiates between contractual types and situations, with those that are not expressly mentioned being understood to be subject to the general regime of Law 9/2017 on public sector contracts.

a) Automatic suspension – ex lege – of services or supply contracts of a repetitive nature that, despite being impossible to comply with in the current situation, have not lost their purpose and can be complied with on their own terms once the agreed restrictions and containment measures to fight against COVID19 have ended. The contractor must communicate the situation to the contracting body, which has a period of five days to decide (if it fails to so, silence means negative). The resumption shall be subject to the express decision of the contracting authority.

b) Other services and supply contracts may be extended up to the maximum equivalent time lost due to COVID19, without the application of penalties, following a reasoned request to the contracting authority. The rule does not indicate the meaning of silence in this case, but treating it – as it seems to be – as a regulated act, it could be concluded that

c) Building contracts that become impossibe for their purpose to be continued or maintained, may be the subject of a reasoned request for suspension for the duration of the current situation. The contracting authority has five calendar days to resolve the matter, with silence  being negative. It is not clear (Article 34.3) whether these provisions apply generally or only to works that had a completion date set between 14th March 2020 and the end of the state of alarm period. It is unreasonable to differentiate between cases here, particularly when the end date of the state of alarm situation is uncertain and can be extended in the future. Discriminating between these situations may pose more problems than it solves, so we consider clarification to be necessary – and probable.

d) Finally, in the case of the works and service concessions in force as at 17th March 2020, measures are envisaged to redress the economic balance, either by extending the concession term (maximum 15%) or by amending the economic clauses of the contract to compensate for the loss of revenue and the increase in costs. Although the rule is limited to stating that it is the contractor who must apply and prove the damage, it goes without saying that the evolution of the situation allows for the most appropriate measures to be proposed, in succession, at each point, even a combination of both.

e) In all the cases mentioned, the contractor’s right to be compensated for the damage suffered as a result of the measures to contain and combat the COVID19 is recognised, with the scope expressly indicated in each case, which is strictly and restrictively linked to the circumstance determining the temporary suspension (salaries of personnel assigned to that contract, costs of guarantees or of rental of installations or machinery attributable to the period, related insurance policies…) A reasoned request from the contractor and reliable, dated, proof of the damage is always required. The contracting authority must decide within five calendar days.

As stated at the beginning, the rule is of an urgent character and the exceptional regime that it introduces is superimposed and coexists with the general contractual regime of Law 9/2017 and the rest of the administrative provisions, particularly with regard to the procedural requirements, the rights of the contractors-administrators and the rules on the liability of public administrations.

It cannot be ruled out that this Royal Decree Law 8/2020 of 17th March will be  added to, clarified or developed in the coming days. There are some questions that should be clarified, for example: Does the contractor have an obligation to maintain the service during the time between the request for suspension and the refusal or silence? Can any type of responsibility or penalty be derived from his conduct? In addition, if the Administration has generously imposed the duty to compensate for damage resulting from the suspension of contracts due to COVID19 , should the same protective solution not also be adopted for contractors who may be forced to terminate their contracts due to force majeure?

If you have any queries or wish to analyse the specific situation in which you find yourself, please do not hesitate to contact our Public Law Department.