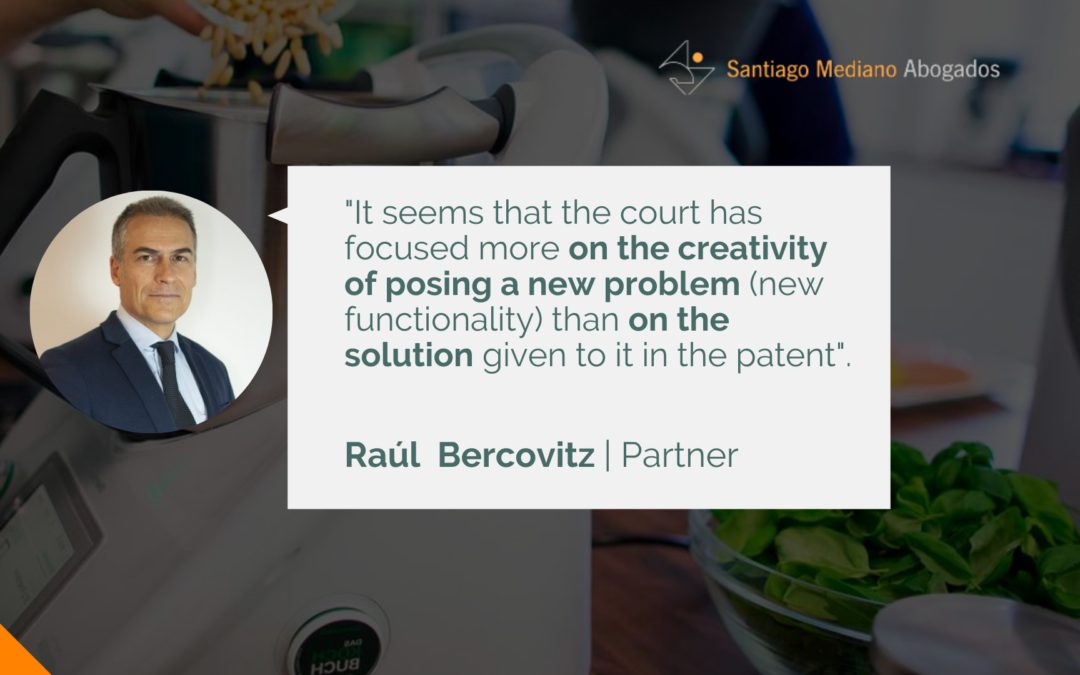 The judgment of the Commercial Court No. 5 of Barcelona of January 19, 2021 (JUR\2021\14695) resolves the conflict raised between Vorwerk, holder of a European patent validated in Spain that protects the technology incorporated in a food processor (popularly known in the market by the trademark Thermomix®), which in June 2019 filed a lawsuit for infringement of its patent against LIDL Supermarkets.

The defendant manufactures a similar food processor, but marketed at a much lower price, known in the market under the trademark Silvercrest® and commercially identified as ‘Monsieur Cuisine Connect’.

The defendant, LIDL, defended itself with two arguments.

The court considers that, although the cooking machines were already known, the invention consists in the patented cooking machine operating safely by means of circuits that allow the independent operation of the stirring and weighing devices, in such a way that when the switch is actuated, the stirring vessel stops working, but not the weighing function.

The advantage, therefore, is that in the initial stage the shaker vessel is filled without the cover, but once the cover is on and the shaker mechanism is working, food can be weighed with the cover on. That is, regardless of whether the vessel is secured or not, or whether the cover is open or closed, as long as the machine is plugged into the power supply and turned on, the food can be weighed, since the weighing system is independent of the switch that is activated by fixing the vessel and securing the cover on the vessel.

This allows you to weigh something by placing it on the closed cover, avoiding the need to open the cover. Or the other way around, it can be weighed with the cover open, placing it inside the vessel.

Apart from the objections of added subject matter and lack of novelty, the judgment makes an interesting analysis of the inventive step of Worwerk’s patent.

To assess the existence or not of inventive step in the Worwerk patent, the Court uses the method (used by the EPO) called “problem and solution approach“, which basically aims to avoid an ex post facto assessment of inventive step.

The court states that the technical problem that Worwerk’s patent is aimed at solving is “how to perform the weighing of food in the stirring vessel irrespective of the state of the switch“.

Well, in view of this technical problem, the court examines whether the solution given by the Worwerk patent was obvious to a person skilled in the art on the basis of the Philips patent (EP 0638273) in combination with the Braun patent (US 5 329 069) or the French Ronic patent (FR 2651982).

And it concludes that at the priority date of the Worwerk patent a person skilled in the art “would not have” come up with the claimed invention, because the referred patents describe kitchen machines with weighing devices in which it is taken for granted and assumed as a matter of course that food weighing is done before or after food processing or that, if in food processing mode, it is not possible to activate the weighing function, as the structure is blocked.

And to illustrate the non-obviousness of the invention, the court quotes the statement of one of Worwerk’s experts: “What now seems so easy –that I can cook while I am weighing– previously seemed impossible, so impossible that it was not even desired“.

In other words, there is inventive step because the previously known devices (and the patents that protected them) did not even consider this as a problem to be solved; they did not consider this new functionality or improvement of the cooking machine: none of the previous patents evidences/suggests/insinuates that it was a technical challenge to create a cooking machine that in addition to processing/agitating would allow weighing food by independently activating both functions (weighing food in the container or stirring vessel regardless of the state of the switch).

Although the technical solution was simple, the court considers that it was not obvious. It is stated that a person skilled in the art starting from the prior art and with the combination of the mentioned patents would not have arrived at the invention, as he would not even have found the motivation to do so.

Decision of the Court

In conclusion, the Court considers it proven (a) that the Spanish patent ES 2 301 589, owned by the plaintiff Vorwerk, is valid as it meets the requirements of novelty and inventive step and no defect of added subject-matter alleged by Lidl is found; (b) that the machine ‘Monsieur Cuisine Connect’ marketed by the defendant Lidl, reproduces each and every one of the features of the first claim (R1) of the patent owned by Vorwerk, including feature R1.1, as interpreted by the court; and, consequently, it is performing acts of direct exploitation of said invention prohibited by Art. 59 of the Patents Act 2015.

Consequently, the court prohibits LIDL from importing, advertising or marketing the ‘Monsieur Cuisine Connect’ machine, for infringing the exclusive rights deriving from the patent. It also ordered LIDL to remove from the market all units of the disputed machine in its possession and that of its distributors, as well as all advertising material.

It also orders LIDL to compensate Worwerk for the damages generated by the infringement, in the amount that, in accordance with art. 74.5 of the Patent Act 2015, will be determined in the execution phase of the judgment once it becomes final… which may take some time if LIDL, as is foreseeable, files an appeal against this judgment before the Provincial Court of Barcelona (15th Section).

The ruling only affects the ‘Monsieur Cuisine Connect’ model, the one with the touch screen, for marketing in Spain. Other models of this food processor (e.g. the Monsieur Cuisine Plus model) do not incorporate the patented weighing system and, therefore, are not affected and can continue to be marketed without problems.

Worwerk will probably use this judgment as a reference to try to replicate this judicial success in other European countries where it has patents in force protecting its food processor (Thermomix ®).

What is most striking about the present case, and perhaps in legal terms what matters to patent attorneys is that the court grants validity to a mechanical patent claim (R1) some of whose features are phrased in terms of the functionality pursued (e.g., R1.6, the independence of the switch and the weighing device) which is almost the technical effect pursued, rather than the means of achieving it. It is therefore a claim drafted in very broad terms.

In fact, the court itself recognizes that the inventive step would be more in the new functionality incorporated to the cooking machine (independence of the agitation process with respect to the weighing process) rather than in the way of achieving it, which is very simple. It is expressly conceded that the technical solution offered by the patent “is very simple”; and, in spite of this, the existence of inventive step is found to exist.

The court’s statement is very significant when it declares that “due to the simplicity of the invention, any technical expert “would have been able” to achieve it. Now, as the expert … says in his report, “in the simplicity lies precisely the inventive step, since the person skilled in the art must overcome the mental barrier that no one has done something so supposedly simple before””.

In this case, it seems that the court has focused more on the creativity of posing a new problem (new functionality) than on the solution given to it in the patent.