LIDL succeeds in having the Thermomix® patent revoked 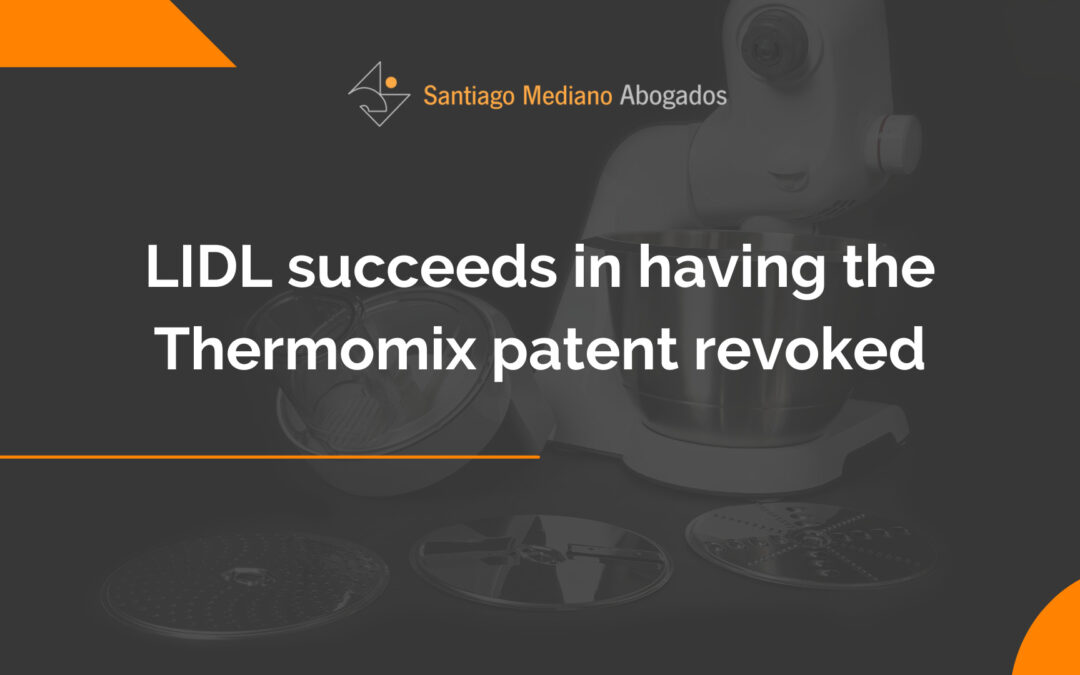 In its Judgment of 13 January 2022, the 15th Section of the Barcelona Court of Appeals upheld the appeal filed by LIDL against the judgment handed down by Commercial Court No. 5 of Barcelona which had condemned LIDL for patent infringement. The dispute concerns the European patent validated in Spain which protected the technology incorporated in the food processor popularly known on the market by its brand name Thermomix®.

In the first instance judgment, LIDL was prohibited from importing, advertising or marketing its ‘Monsieur Cuisine Connect’ food processor, for infringing – as it was declared – the patent of VORWERK, the manufacturer of the Thermomix®.

At the appeal stage, the situation has changed. The Court of Appeals’ ruling states that WORWERK’s European patent is invalid on two grounds: addition of new matter and lack of inventive step. Furthermore, even if it were valid, it would not have been infringed.

The judgment upheld the addition of new subject matter as a ground for invalidity on the grounds that “the protection was unlawfully extended in the course of the patent prosecution“. In other words, VORWERK included new elements in its patent application during its prosecution before the European Patent Office (EPO), which is not permitted.

The court is of the opinion that “the fact that the initial description mentions separately two functions of the control board (stirring and heating) and makes no reference to the weighing device prevents it from being considered that this application disclosed the idea of a weighing device controlled by an autonomous circuit of the same control board as the stirring device and the heating device” […]; and that “it is clear that this disclosure is not made expressly and we do not believe that it is made implicitly”. Therefore, the final wording of the claim, by including these features, infringed the prohibition on extending protection over what was originally claimed. This leads to the invalidation of R1 (main claim) for extension of subject matter and, with it, the entire patent.

As regards the requirement of inventive step, the Judgment analyses the differences between the two companies’ food processors in the safety system of the glass in which the food is introduced. It examines whether the LIDL robot incorporates feature R.1.1 of the WORWERK patent (safety system). In this respect the court states that “the dispute centres on whether in the defendant’s product the stirring bowl and the lid can be interlocked in such a way that no intervention inside the stirring bowl is possible during operation. The defendant argues that in order to be able to intervene in the beaker it is necessary to stop the stirring mechanism beforehand, whereas the plaintiff argues that unlocking the lid deactivates the switch and stops supplying power to the stirring mechanism”. The Board then concludes, “we believe that of these two interpretations of the title, the one that best fits the description is the one given by the defendant. We reach this conclusion considering that the patent does not claim any new solution in relation to the safety system which was already part of the state of the art but merely reproduces a solution of the prior art which consists, in substance, in the fact that the lid cannot be unlocked unless the agitator mechanism is first switched off”.

In other words, it is claimed that the feature claimed as a solution to the technical problem was already in the prior art, so that for a skilled person, it would have been an obvious solution to that problem.

As the patent is invalid, both for addition of new subject matter and for lack of inventive step, there is no longer any need to examine whether there is infringement (an invalid patent cannot be infringed). But the Judgment further states that, even if WORVERK’s patent were valid, it would not have been infringed by LIDL.

WORWEK claimed that LIDL had reproduced one of the features claimed in its patent, consisting of the safety system that prevents the lid of the mixing bowl from being removed without first stopping the robot. However, the Provincial Court declared that “there is no infringement because the defendant’s [LIDL] food processor does not reproduce the sequence necessary for safe intervention in the shaker cup. In the Lidl food processor, the lid can be opened without the need for any prior action, i.e. without the need to stop the stirring mechanism beforehand, and it is that opening or unlatching of the lid by means of a small turn on its axis which stops the stirring mechanism, albeit not immediately’. In Lidl’s machine, the blades stop when the lid is opened and can maintain an inertia of operation with the lid open.

Thus, the Lidl robot does not need to stop the cooking process to open the lid, unlike the Thermomix. This would show, in principle, that Lidl would not have reproduced WORWERK’s patent on this aspect. So even if the patent were valid, there would be no infringement either.

Although this judgment could still be subject to appeal before the Supreme Court (possible appeals in cassation and extraordinary appeals for procedural infringement), for the time being LIDL will be able to resume marketing its Monsieur Cousine Connect food processor, which had been withdrawn from the market as ordered by the first instance judgment.

What is most striking in this case is the different approach to inventive step taken by the lower court and the Court of Appeals. In our commentary on the first instance judgment (https://www.diariojuridico.com/las-claves-de-la-condena-a-lidl-por-infrigir-la-patente-del-robot-de-cocina-thermomix/ ), we already noted that the Court had set the bar for inventive step very low, as it admitted that the inventive step lay more in the new functionality incorporated into the food processor (independence of the stirring process from the weighing process) than in the way it is achieved, which is very simple. The lower court even stated that «because of the simplicity of the invention, any technical expert would have been “able” to reach it». However, “it is precisely in the simplicity that the inventive step lies, because the person skilled in the art must overcome the mental barrier that no one has done something so supposedly simple before“. The solution adopted by the patent was so simple that the Court of Appeals took a different view, considering that the solution was in the state of the art and so simple that it was obvious to a person skilled in the art. It is not enough for the functionality sought to be creative; the way in which it is achieved must also be creative.