U.S. proposes to temporarily suspend the enforceability of patents on COVID vaccines

by Santiago Mediano Abogados | May 7, 2021 | Uncategorized 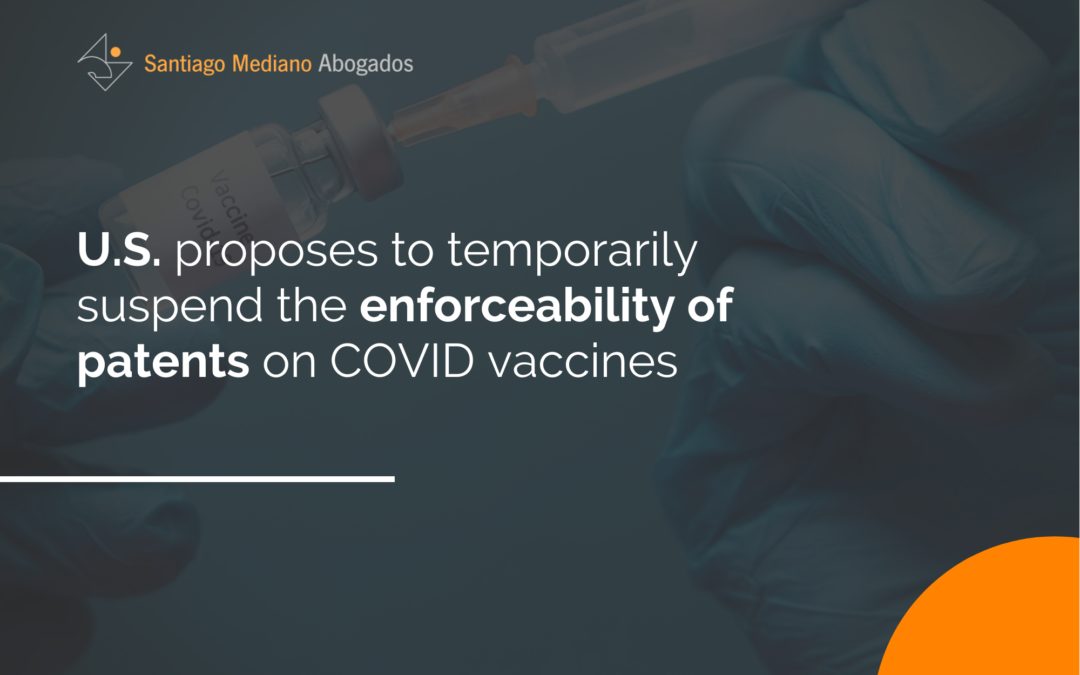 On Wednesday, May 5, 2021, the President of the United States, Joe Biden, announced a change in the position of his administration, declaring that he will support at the World Trade Organization (WTO) a temporary suspension of the effectiveness of patents registered by multinational pharmaceutical companies on the vaccines they have developed against the coronavirus, for the duration of the pandemic.

This announcement comes in response to pressure from many countries in view of the emergency situation currently being experienced in some parts of the world, for example in India and Brazil, where the pandemic is out of control. The philosophy behind this announcement is that developing countries do not have easy access to vaccines, given their scarcity and the costs involved in acquiring them to vaccinate the entire population.

The intention is that all countries should be able to manufacture the necessary doses of vaccines in their territories at cost price and without having to pay the royalties derived from the exclusive rights generated by the patents.

U.S. Foreign Trade Representative Katherine Tai justifies this proposal by stating that “This is a global health crisis and the extraordinary circumstances of the COVID-19 pandemic call for extraordinary measures“.

Not surprisingly, there have been immediate reactions both for and against the proposal. The WHO is obviously very interested and values the measure very positively, while the pharmaceutical companies have been very critical of it, since in some way they value a suspension of the effectiveness of their patents, in which they have invested billions of euros, as a kind of expropriation of their right to amortize their investments and obtain a profit from them.

In Europe, the Member States are for the moment divided. Some countries are in favor of the measure (including Spain), while others are totally opposed to it because they consider that it is not the solution to the problem (including France and, above all, Germany).

Critics of the Biden administration’s proposal argue that suspending the effectiveness of patents will discourage biotechnology companies from developing products in future pandemics. They even argue that no company will invest millions of euros in adapting existing vaccines to new variants of the virus if they are not certain that they will be able to recoup their investments and make a reasonable profit.

After all, these are private companies whose raison d’être is to make a profit for their shareholders. They will not work “gratis et amore” for mankind, even risking losses, as they will not be able to amortize their research expenses. This is why the stock markets have not welcomed the news. The shares of the pharmaceutical companies that manufacture vaccines against the coronavirus fell drastically after learning of the proposal.

On the other hand, it is not clear that patents are the only obstacle to access to vaccines by all countries. Obviously, the cost of doses, the price of which includes patent licensing fees, is an obstacle. But it is not only the price. The scarcity of raw materials and access to them, as well as the infrastructure needed for mass production of vaccines, could also prevent the suspension of patents from generating a substantially higher flow of vaccines to developing countries.

The Biden administration’s proposal is undoubtedly well-intentioned. Whether it can be effective is another matter. In a way, it is a short-term measure, to get out of the rut in the next few months (if it has the desired effects), but in the long term it could have seriously pernicious effects. This expropriation (albeit temporary) of pharmaceutical companies’ rights of return on their research expenditure would be disastrous in the medium and long term, as it would severely penalize private initiative in this sector, which is currently the most powerful, far ahead of research into vaccines by public institutions.

In a way, the “miracle” that we have witnessed in the last year, in which we have seen the development of vaccines in record time (vaccines that would otherwise have taken several years, lustrums, or even decades to achieve), has been possible thanks to private initiative, whose incentive is patents. Eliminating (or suspending) this incentive will mean penalizing private research, which will no longer be profitable and, therefore, will no longer be undertaken.

All in all, the measure, which in the best of cases could be useful in the coming months, is a short-sighted and opportunistic measure, as are usually the proposals of politicians, who are more concerned about their image and immediate popularity, and about getting out of the rut, than about taking sensible measures for the future. As we say in Spain, “bread for today and hunger for tomorrow” (“laugh now, cry later”).